skip to main | skip to sidebar

Should he stay or should he go?

There has been a lot in the press lately about the possibility of Mark Gasnier leaving the Dragons (St George Illawarra) to sign up for Rugby Union.

This hilights an issue that I feel very strongly about. I love both Rugby League and Rugby Union. From St George Illawarra to Southern Districts and beyond there is one thing that is going to link these codes fairly closely over the next few years... The Salary Cap.

Why can't a player who has X amount of talent be paid whatever he is worth. To me this includes on-field talent, and marketability. Missionaries (okay, hear me out) have to raise their own support to go and do the mightiest job off all, and yet various organisations won't let these athletes have the opportunity of earning whatever the "labels" are willing to throw at them. The corporate world is based on the highest bidder wins. Why can't they allow those who can make the bids into the Rugby League arena?

Whilst I don't think Gaz is quite worth the bikkies that Rugby Union is allegedly going to throw his way, wouldn't it be better that he stays in League and be paid what he is worth there? In my opinion the salary cap has it's place, but have any of you been on the same rate of pay for over 5 years?

It's time to get a bigger cap, or let the corporate giants throw their (endorsed) caps into the ring.

PS Matt Giteau, if you're reading this, please sms Gaz the name and number of your hairdresser!
Posted by Kathryn at Wednesday, April 26, 2006 No comments:

This is literally about the 5th time I have attempted to blog this over the last few days, so bear with me!

Easter Weekend we went to Sydney for Sean's 1st Birthday party with his Grandparents and my sister Jen. All was good - Sean was spoilt!

On our way out on Sunday to see our friend's new baby, Tara, we stopped by at a familiar place... 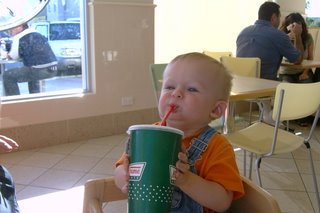 I wish I had a picture of this... took Sean out for his first Babycino today at Perenti. It was a great way to mark the (almost) end of a very busy week (more on that later).